Science: a completely Italian research reveals how cells dispose of a receptor involved in many tumors

The process of cellular duplication is controlled by, among other things, stimuli from the cell’s environment through activation of certain receptors on its surface that function as proliferation switches. Eliminating these switches once they have performed their physiological function is crucial, because excessive proliferation is a characteristic typical of cancer cells. A group of researchers led by Pier Paolo Di Fiore and Sara Sigismund from IFOM and the University of Milan, in collaboration with the Experimental Imaging Center directed by Professor Carlo Tacchetti of the IRCCS San Raffaele Hospital, unveiled one of the mechanisms through which cells internalize one of these receptors, the EGF receptor, and eliminates it. The discovery, published today in the prestigious journal Science, and possible thanks to the support of AIRC, opens up new research prospects in the battle against cancers with abnormal EGF receptor levels, such as brain, colon, lung, and breast cancers. 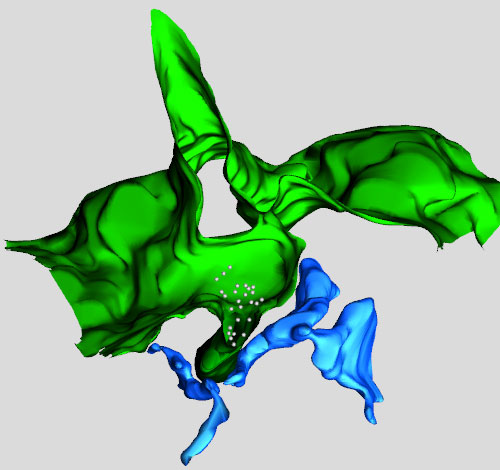 3-D Reconstruction by Electronic Tomography (ET) of an area of cell surface (in green) that folds into the cell interior, trapping receptors (white spheres). The endoplasmic reticulum (in blue) is in contact with the inwardly folded cell surface and is pulling it away and dragging it within the cell. In this way. the receptors are removed from the cell surface.

Cells communicate with the outside environment through their cell membrane, which delimits their living space and is able to receive and transmit the myriad chemical signals that drive important cellular processes. This continuous exchange occurs through receptors located on the membrane that work something like antennas. One of these, the EGF receptor, is particularly important for receiving proliferation signals. However, once the signal has been received, the EGF receptor must be removed from the cell surface; otherwise, the cell would continue to divide uncontrollably. Removal of cell surface receptors occurs through the endocytosis process, in which the receptors are literally engulfed into the cell, where they are destined for destruction. Disorders and malfunctions in endocytosis can contribute greatly to tumor formation and proliferation, by leaving switches open to excessive stimulation that causes the cell to behave abnormally. That is why it is so important to understand this mechanism.

"Understanding cellular mechanisms - explains Pier Paolo Di Fiore, Director of the IFOM Research Program Cellular Logistics in Cancer and Professor at the University of Milan - is crucial to allowing us to study how these mechanisms are altered in various diseases, among which the most important for us is cancer. However, there cannot be action without knowledge. The road to developing new strategies to combat cancer goes through the molecular laboratories that study the extreme complexity of the cell: a long and meticulous, but absolutely essential task."

Pier Paolo Di Fiore's research team has spent the last 20 years studying endocytosis, revealing that it is much more complex than previously recognized by the scientific community. With the study published today in Science – which was only possible by combining genomic, proteomic and high resolution electron microscopy technologies - a new mode of absorption for endocytosis is described for the first time. "We have identified a group of specialized molecules. - says Sara Sigismund of IFOM, a research correspondent along with Professor Di Fiore - Some of them are in the endoplasmic reticulum, an organ that literally forms a network within the cell. When it is necessary to remove and destroy EGFR, the network extends up to the cell surface where the receptor is located and pulls it inside the cell. In abnormal situations where this group of molecules does not function properly, the network is no longer able to reach the cell surface to reabsorb the receptor, which continues to produce the duplication signal. "

"We were able to observe this mechanism thanks to an improvised high-definition microscope. A further demonstration of the need for cutting-edge technologies such as those at San Raffaele and experienced personnel who can use them in innovative ways to achieve excellence", explains Carlo Tacchetti of the Experimental Imaging Center at San Raffaele Hospital in Milan.

The next step will be to understand how the newly described endocytic mechanism may be altered in cancer cells. "If its role is confirmed," says Di Fiore, "it could explain why EGF receptor activity is increased in some tumors, paving the way for further research to identify new therapeutic targets for striking tumors and interfering with their growth." 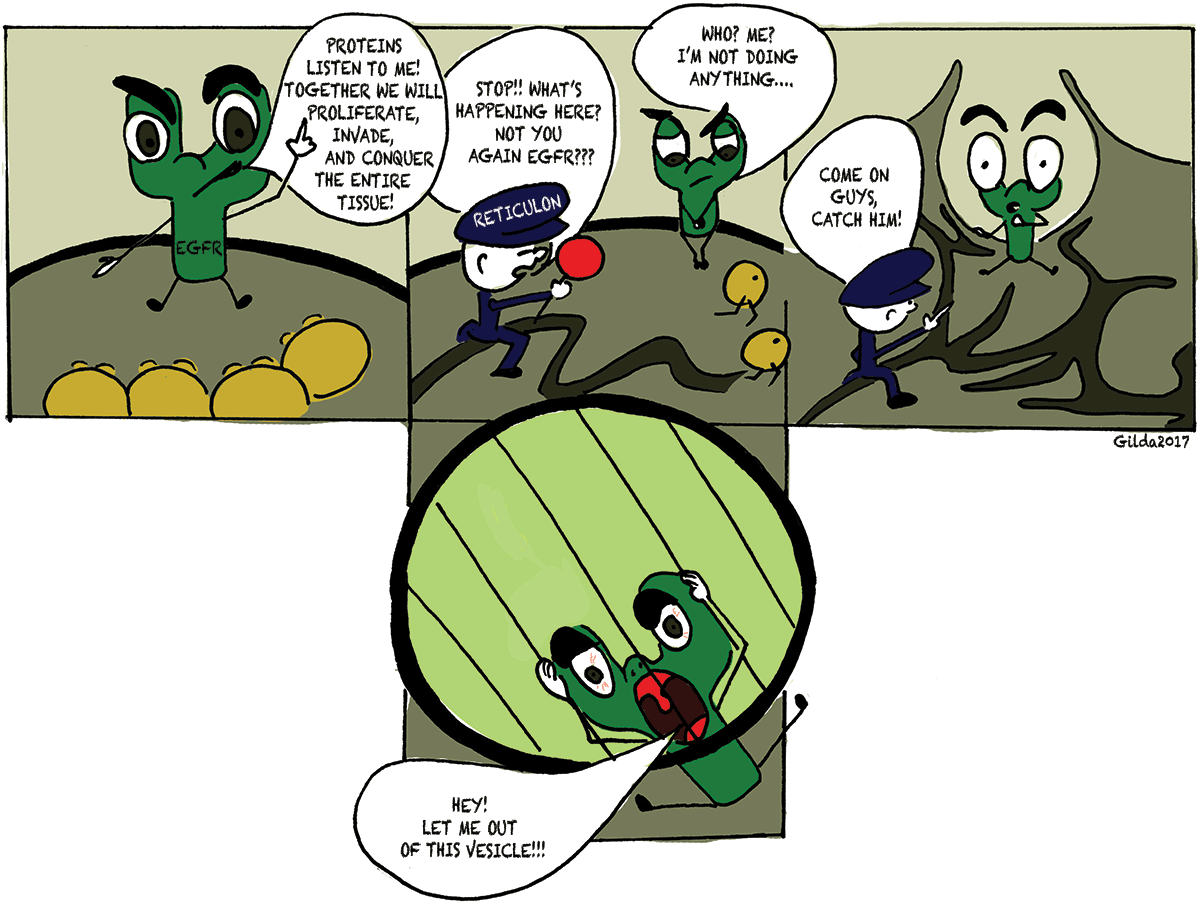