Lymphomas: Italian research highlights their complexity and recommends the use of combined therapies

A team of IFOM researchers in Milan has identified the mechanisms through which a protein called B-cell receptor controls the growth of aggressive forms of non-Hodgkin lymphoma. The research, published in the pages of the prestigious scientific journal Nature and made possible through the support of the Harvard-Armenise Foundation and AIRC, points to the usefulness of disentangling the complexity of lymphomas by measuring BCR expression in tumour cells at diagnosis, using a simple laboratory test. The new data suggests ways to improve existing therapies for the treatment of various forms of lymphoma and leukemia, proposing therapeutic approaches based on drug combinations. 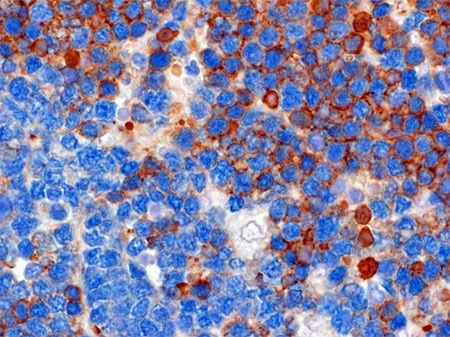 Lymphomas are cancers of the blood that commonly affect one of the key players in the immune system: the B lymphocytes.

Recruited to defend us from attacks by agents such as viruses and bacteria, B lymphocytes recognize intruders by capturing them with receptors called immunoglobulins or B cell receptors (BCRs) that are exposed on their cell surface. The binding through the BCR of pathogens stimulates the lymphocyte to proliferate, accompanied by the release in body fluids of large quantities of soluble forms of the BCR that contribute to the rapid neutralization of the infectious agent.

Upon recognition of a virus or bacterium, proliferating B Lymphocytes acquire "benign" mutations in their BCR genes, in order to improve their ability to bind to and neutralize the pathogen. This process is not free of errors, leading in rare cases to mutations in other genes that may ultimately promote the development of lymphomas or leukemia. In these tumours, the BCR remains expressed on the surface of the neoplastic B lymphocytes, favouring uncontrolled growth. This has made the BCR a prime therapeutic target for various forms of non-Hodgkin lymphoma, as well as for chronic lymphocytic leukemia, the most common form of adult leukemia. A study published today in the prominent scientific journal Nature, conducted by the unit of Dr. Stefano Casola director of the Molecular Immunology and Lymphoma Biology program at IFOM in Milan, who has returned to Italy thanks to support from the Armenise-Harvard Foundation after initiating the project at Harvard Medical School under the mentorship of immunologist Klaus Rajewsky, warns of the potential risks of anti-BCR therapies, while revealing strategies to make them more effective. By studying a mouse model of Burkitt's lymphoma, an aggressive form of non-Hodgkin lymphoma, the researchers were surprised to find that the tumour cells lacking the BCR continued to grow, while they rapidly disappeared in the presence of malignant B cells retaining the BCR. These results have led to the hypothesis that the BCR benefits lymphoma cells that express it, preventing, at the same time, the growth of those that have lost it. The research quickly switched from studying the murine model to the analysis of human Burkitt lymphoma cases. It was obvious from the analysis of the first clinical samples that the observations made by the Casola team were correct. While most tumour cells retained the BCR, it was lost in a subset of the neoplastic cells in about one third of the Burkitt's lymphoma cases that were analyzed.

Inspired by these observations, Stefano Casola offers to oncologists a new therapeutic perspective: "While anti-BCR drugs inhibit the majority of lymphoma and leukemia populations expressing the BCR, they are likely to favour the growth of rare BCR-less tumor cells, which may set the stage for disease relapse."

The study published in Nature provides hints on how this scenario can be avoided. Thanks to studies in the murine model, Casola adds "we have identified the Achilles heel of BCR-less lymphoma cells." "We have discovered - continues Casola - that these cells are particularly fragile to nutritional stresses, making them ideal targets for drugs like rapamycin."

The results of this study provide a rationale for revisiting the current diagnostic and therapeutic procedures for patients with B cell lymphomas or leukemias. By combining a simple laboratory test with histological analysis on biopsy material or blood, it will be possible to monitor BCR status in the tumour population at diagnosis. This information - concludes Casola - promises to help oncologists design personalized therapies in which pharmacological BCR inhibitors may be combined with drugs such as rapamycin to combat the cellular complexity of the tumor.

This research would not have been possible without fundamental contributions from the Harvard Armenise Foundation and the Italian Cancer Research Association, among others.